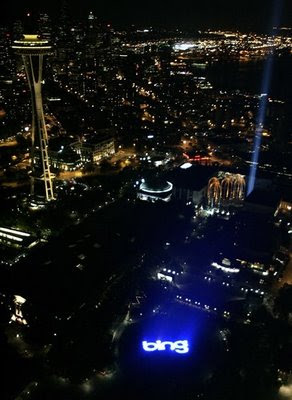 Here's a great case study about how sustainable lighting is not only efficient but also does cool tricks from Dwayne Thomas over at Hollywood Lighting Services!
“Bing,” Microsoft’s new “Decision Engine,” had just been launched and its marketing agency wanted to make a big splash. Bing has a distinctive logo that was presented in lights in a very large format for filming from a helicopter for future advertising use.
“It needed to be extremely bright and draw as little power as possible. As a bonus, we set out to create a logo display that could be animated.” Traditional projectors or video would not have done the trick and would have been prohibitively expensive, so we decided to take an approach that employed 100% LED technology.”
Ultimately, the Bing logo was created using (330) LED RGB fixtures, which were individually pixel-mapped to video (via media server) for amazing real-time effects. The fixtures were laid out to within a 1/4 inch tolerance on a lawn at Seattle Center using survey equipment, following a CAD layout that was created from a simple graphic image of the logo.
The LED logo array was over 90’ wide when finished, and the entire job was installed and ready to show in just over a day. “I credit great equipment and diligent pre-production processes,” said Tony Bove, HLS Seattle’s Creative Director and the project manager. “When we told the survey equipment provider that we intended to locate 330 points in about 6 hours, they laughed! But we got it done in plenty of time, and only had to relocate one fixture after the initial camera test.”

As seen in the event photograph, the beam of light from the logo compared very favorably in brightness to the nearby pod of (20) 7,000w searchlights (seen in the top right-hand side of the photo). However, the logo consumed on average about 20% of the energy of the searchlight beam, changed color and played back video signal, and of course, had the added bonus of actually spelling something!
Posted by Nancy J. Zavada, CMP at 11:50 AM