Standing on the 50 Yard Line 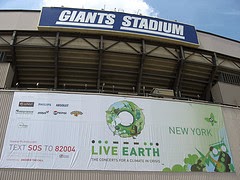 In July of 2007, we were standing on the football field in Giants Stadium making preparations to bring sustainability to a very large sports arena.  How could we possibly recycle, compost and otherwise divert the waste of 51,000 screaming fans?  In our case, the fans were concert goers for the Live Earth Festival and the greening of sports venues hadn't caught on as it has today.

It was daunting at best, but mostly terrifying.   As I stood on the fifty-yard line my initial “freeze-fight-flight” response was to run across the field, up the stairs and get the first plane home.  Thanks to my fellow MeetGreen team members, who believed we could make a difference even though their knees were knocking too, I stayed on the field.

As the media hype builds surrounding the Super Bowl in Giants Stadium (now MetLife Stadium), I am having flashbacks of:
The plan came together and through the commitment of so many, Giants Stadium was able to divert 76% of the waste from the landfill.  The Stadium Operations Team was the true MVP of the day because without their dedication and hard work, the project would have never been successful.   Even after the event, they hoped to be able to incorporate many of the practices they learned on Live Earth and carry them through to the new stadium when it was built.

Fast forward to 2014, where the headlines read this will be the “Greenest Super Bowl Ever.”   This time I am watching from the stands (aka my couch) not the 50 yard line.  I am rooting for the Stadium Operations Team we worked with and hoping that the groundwork we laid together nearly 7 years ago has made their greening efforts a little easier this week.

Past blogs with links about greening Giants Stadium and the Live Earth Concerts:  Leaving a Legacy and Hotter Than It Should Be.
Posted by Nancy J. Zavada, CMP at 4:12 PM