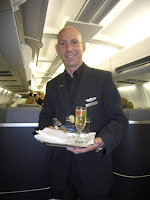 Weddings require a lot of beautiful flowers. They just do. I know cut flowers have a variety of environmental issues associated with them such as how are they grown, how far away are they grown, and what happens to them after an event which usually doesn’t last more than a few hours. But I just love them in every shape, form and smell. I had stumbled upon another green wedding decision point.

Our 1940’s nightclub theme (think Casablanca) lends itself to potted plants-- uplit for drama-- with shadows playing on the walls. The potted palms can be rented locally and returned to see many more events reducing the need for cut flowers. Perfect answer.

That only left the centerpieces. I wanted to use live orchid plants but couldn’t find any low enough to fit under the silver table lamps. After much deliberation, our best design was to use a single orchid bud—minimal cut flowers while still having a dramatic effect.

Next stop, a local vendor where we found the ideal orchid that was popular in the 1940’s, would add color and mystery to the table and could be easily donated. As I was about to place my order she said, “Wonderful, we will fly these in from New Zealand for your wedding.” My heart sank. I had visions of these delicate blossoms flying first-class in a 747 drinking champagne and burning fossil fuels by the ton during their 9,218 mile trip to Portland. I just couldn’t bring myself to order them. We talked about other flower options, but none had the same effect and I left without a plan.

I had chosen the right vendor though, because several days later she called with the news she had found a grower right here on the Oregon Coast who could supply the exact same flowers. She had taken it upon herself to research possibilities and as a bonus found a local grower for her future orders as well!